Cabot’s ring bodies - Ring or figure-of-eight shaped structures found in red blood cells which stain red with Wright’s stain. They are probably remnants of the nuclear membrane as a result of a degenerative process and are found in severe anaemias
Cajal bodies - These are spherical nuclear organelles (arrowed) containing factors involved in RNA-related metabolic processes. Also termed nucleolar accessory or coiled bodies, they are found close to the nucleoli (labelled 'n') in proliferating and metabolically active cells.  They are able to move within the nucleoplasm to and from nucleoli and they can join with each other to form larger structures (also see Nuclear bodies)
Calcareous bodies - Corpuscles found in the parenchymal cells of helminths such as cestodes and trematodes. These basophilic bodies contain calcium, phosphorus, silicon and zinc. They are associated with tapeworms such as Taenia solium and Spirometra (Sparganum) mansoni, a cestode implicated with the parasitic disease sparganosis
Calcific bodies - These are roughly circular, basophilic staining bodies often termed calcinospherules. They sometimes resemble yeast cells and stain with the H&E and von Kossa. Although occasionally staining positive with the PAS, they are unstained with methenamine silver since they dissolve in the chromic acid oxidant used in the method. These bodies are associated with dystrophic calcification and maybe mistaken for the pathogenic fungus Coccidiomycosis imitis

Call-Exner bodies - These are small eosinophilic, fluid-filled spaces that are found in the ovary between the granulosa cells in ovarian follicles and in granulosa cell tumours. They are composed of membrane-packed secretions of granulosa cells and are linked to the formation of liquor folliculi
Cardioaortic bodies - see Aortic bodies

Carotid bodies - Small pieces of tissue containing chemoreceptors and located in the carotid artery (also see Aortic bodies). They respond to changes in the concentration of oxygen and carbon dioxide in blood and help to control the process of ventilation

Caterpillar bodies - These are eosinophilic, PAS-positive globules arranged in a linear fashion in blistering disorders of the skin such as those found in porphyric bullous eruptions. They are so called because the segmented, elongated shapes of them resemble the larvae of butterflies
Cavernous bodies - These are particular vascular structures that collect arterial blood before it flows into veins. They are found in the anal canal and help to control faeces. Haemorrhoids are described as the enlargement of cavernous bodies. Cavernous bodies of erectile tissue are also found in the penis (corpora cavernosa and spongiosum) and clitoris. Cavernous bodies are sometimes known as corporal bodies
Cell bodies - This term is usually used in reference to the main part of nerve cells (neurones) which excludes the axon and dendrite processes
Charcot-Bottcher bodies - Irregular shaped and roughly parallel filaments also known as Charcot-Bottcher crystals. They are found in the cytoplasm of Sertoli cells which are located in the epithelium lining the seminiferous tubules of the male testes. They form the framework for the support and nutrition of the cells involved in spermatogenesis

Charcot-Leyden bodies - Crystalline bodies shaped like elongated double pyramids. They are formed from eosinophils and are found in the sputum of patients with asthma
Chromaffin bodies - Small round bodies containing chromaffin that are present in pale staining cells termed chromaffin cells. Also termed paraganglion or Pheochrome bodies, they are found near the aorta and in organs such as the adrenal, liver and kidneys. Chromaffin cells of the adrenal are known as medullary cells or pheochromocytes and secrete two catecholamines. They stain readily with chromium salts

Ciliary bodies - These are structures that release the transparent liquid aqueous humour in the eye. They also contain the ciliary muscle which changes the shape of the lens when eyes focus

Citron bodies - Boat or leaf shaped pleomorphic bacteria, usually associated with clostridium septicum (see image below). These are Gram positive, anaerobic bacteria that cause gas gangrene
Civatte bodies - Spherical, eosinophilic hyaline bodies seen in or below the epidermis in the disease lichen planus. Also called colloid bodies, they are formed by necrosis of individual basal cells

Clarke bodies - Intranuclear bodies found in alveolar breast sarcoma (see image below). They are named after Jacob Augustus Lockhart Clarke
​
Cleavage bodies - see Nuclear bodies
Coccoid X bodies - These are minute bodies (elementary and reticulate) found in the blood in the disease psittacosis. This infection is caused by Chlamydia psittaci, a type of bacteria that is found in bird droppings. Birds such as parrots are able to spread the infection to humans. See also Halberstaedter-von Prowazek bodies for other chlamydial infections

Collar bodies – These are sticky, flagellated, funnel-shaped cells that line the inner cavity of sponges. Also termed choanocytes or collar cells, they collect particles of food and have an involvement in the reproduction of sponges 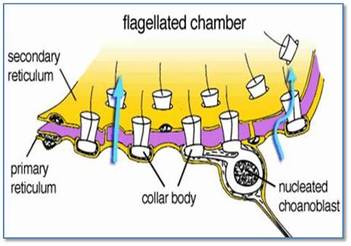 Comma-shaped bodies - These are the precursors to the S-shaped structures that contribute to the morphogenesis of the nephron in the kidney. As the renal vesicle matures, its proximal portion elongates to form comma-shaped clefts

Councilman bodies - Acidophilic, hyaline inclusions located in the cytoplasm of liver hepatocytes. Probably hepatocytes that are undergoing cell death by apoptosis, they are seen in a variety of virus infections, yellow fever and hepatitis

Cowdry bodies - Intranuclear and eosinophilic inclusion bodies found in Herpes and other viral infections. These bodies are composed of nucleic acid and protein and are seen in cells infected with herpes simplex, varicella-zoster and cytomegalovirus. There are two types of intranuclear Cowdry bodies: Type A (as seen in herpes infection) and Type B (as seen in infection with poliovirus)
Creola bodies - Clumps of benign respiratory epithelium in sputum indicative of asthma

Crescent bodies - Often called achromocytes, these are round, transparent bodies of red blood cells with crescent-like margins that contain haemoglobin. They are thought to result from artifactual rupture of the cells and have been found in patients with anaemia and infectious diseases such as malaria and typhoid. These bodies are also known by other names such as demilune, selenoid or semilunar bodies and the transparent portions are sometimes referred to as glass bodies (Also see Giannuzzi’s bodies)
Crooke’s hyaline bodies - These are cytoplasmic granules of pituitary basophil cells that have been replaced by a glassy, hyaline appearance as the result of accumulation of cytokeratin. They are found as a result of basophil degeneration in diseases such as Cushing's syndrome and Addison's disease​​

​Curvilinear bodies - Worm-like, C-shaped formations found in lysosomes in diseases such as lysosomal and neuronal storage disorders. They are derived from the endoplasmic reticulum that lies freely in the cytoplasm. Two types have been identified: Type A are small, electron-dense, worm-like profiles and Type B have circular profiles that represent transverse sections of tubules. Curvilinear bodies are also associated with hydroxychloroquine-induced renal lipidosis and cardiotoxicity (also see Myelinoid bodies)
Cytoid bodies - These appear as fluffy white patches on the retina of the eye. Also known as cotton wool spots, they comprise swollen retinal nerve fibres. They are found in patients with diabetes mellitus and systemic lupus

Davidson bodies - These are small nuclear buds of chromatin found in neutrophil leucocytes in females. Often shaped like a drumstick, they are found in up to six percent of cells. These bodies are absent in males (compare with Barr bodies)
Demilune bodies - see Crescent bodies

​Dohle bodies - These are single or multiple pale-stained areas in the cytoplasm of neutrophils. They are comprised of rough endoplasmic reticulum containing RNA and are thought to represent localized failure of the cytoplasm to mature. These bodies are associated with May-Hegglin anomaly (MHA), a rare genetic disorder characterized by giant blood platelets, and may also be found in patients with infections, burns, poisoning or following chemotherapy
Donne bodies - These comprise modified leucocytes containing fat. They are found in colostrum, a type of milk produced by the mammary glands in late pregnancy. They may also be termed Donne corpuscles or galactoblasts

Donovan bodies - Clusters of encapsulated bacilli in the cytoplasm of mononuclear cells. They are considered diagnostic of granuloma inguinale, a venereal disease caused by the Calymmatobacterium (Klebsiella). Granuloma inguinale is spread by sexual contact and is characterized by chronic genital ulcers. Diagnosis is usually made by examination of impression smears from biopsy specimens
Drusen bodies – These are yellow deposits of lipid protein that occur under the retina and in the optic nerve. They are associated with optic nerve head drusen and age-related macular degeneration and may become calcified (Also see Hyaline bodies)
Dutcher bodies - Intranuclear, eosinophilic globules found in plasma cells. Sometimes termed Dutcher-Fahey bodies, they are found in Waldenstrom’s macroglobulinaemia, a mature B cell lymphoma type and myeloma. In malignant plasma cells, nuclear inclusions (Dutcher bodies) can be found. However, cytoplasmic inclusions (Russell bodies) can also occur in both reactive and neoplastic plasma cells

Ehrlich bodies – see Heinz bodies
Elementary bodies - Chlamydia bacteria may occur in the form of elementary and reticulate bodies. The elementary form is the non-replicating infectious particle that is released when infected cells rupture. It is responsible for the bacteria’s ability to spread from person to person and is analogous to a spore (also see Reticulate and Halberstaedter-von Prowazek bodies)
Elschnig bodies - These are pearl-like clusters formed by growth of epithelial cells on the lens capsule of the eye. Also termed Elschnig’s pearls, they have the appearance of a bunch of grapes or soap bubbles and are often seen in post-operative cataract patients
Embryoid bodies - These are spherical, three-dimensional cell aggregates that are derived from embryonic stem cells. They are made up of a large variety of differentiated cell types. Embryoid bodies are also the name of structures that resemble embryos in germ cell tumours