Sandstorm bodies - These are synonymous with the parathyroid glands, named in the late 1800s by Ivar Viktor Sandstorm, a swedish medical student

Schaumann bodies – see Asteroid-Schaumann bodies
Schiller-Duval bodies - Perivascular structures consisting of tumour cells arranged around a blood vessel. They are pathognomic for yolk sac tumours, the most common testicular cancer in children. They are present in approximately 50% of these tumours and are are said to resemble a glomerulus. Hyaline globules may be seen both inside and outside the cytoplasm and they contain alpha-foetal protein and alpha 1-antitrypsin
Selenoid bodies - see Crescent bodies

Shock bodies - Intravascular hyaline globules seen in the kidneys and liver sinusoids as a result of shock processes.  They may appear following the onset of inflammation as a result of skin burns, in association with septic shock, brain trauma and pancreatitis. In cats and dogs, they are often found in the adrenal glands as a result of viral infections (such as Herpes and Parvovirus) as well as following cardiac or traumatic shock
Simchowicz bodies - Eosinophilic, granulovacuolar bodies of nerve cells found in neurodegenerative disorders such as Alzheimer’s disease. They often parallel the distribution of Hirano bodies and may also feature with Pick and Lewy bodies
​Soderstrom bodies - see Lymphoglandular bodies

Spironolactone bodies - Eosinophilic, cytoplasmic structures up to 15 microns diameter and surrounded by clear halos (see image). They are found in the adrenal cortex of patients on long term administration with spironolactone, a diuretic and anti-androgen. This drug is used primarily to treat heart failure, ascites in liver disease and conditions associated with aldosterone
Spongy bodies - The spongy bodies or corpus spongiosum are masses of tissue surrounding the male urethra within the penis

Stieda bodies - These are ultrastructural organelles located at the polar region of the sporocyst of certain coccidia. They appear like knob-like structures and are plugs occluding a hole in the sporocyst, the breakdown of which allows excystation of the sporozoites
Striate bodies - Striped masses of white and grey matter (the corpus striatum) located in front of the thalamus in each cerebral hemisphere. These bodies appear to be involved in the regulation of voluntary movement

Symington bodies - see Anococcygeal bodies
Tactile corpuscle-like bodies - see Tactoid bodies
​
Tactoid bodies - Also known as tactile corpuscle-like bodies (TCLBs), these are microscopic Schwannian structures that stimulate the superficial mechanoreceptors of the peripheral nervous system (also see Wagner-Meissner bodies). They may be found in various locations such as in the stomach where they appear as ovoid, S100-positive structures often surrounded by normal gastric mucosa. In the skin, they are responsible for sensitivity to light touch
Targetoid bodies - A body or structure having the appearance of a target. Also see Michaelis-Gutmann and owl’s eye bodies

Thyroid bodies - The glandula thyroidea or thyroid gland.  These are butterfly-shaped endocrine glands in the neck that are found on both sides of the trachea. They secrete the hormone thyroxine and help regulate the growth and rate of function of many other body systems
​Tigroid bodies – see Nissl bodies

Tingible bodies - Nuclear debris of macrophages engulfed from dead lymphocytes, imparting the appearance of a starry sky under low power magnification. They are found in normal and reactive lymph nodes and help to distinguish a reactive node from a neoplastic one

Todd bodies - Eosinophilic cytoplasmic inclusions found in amphibian erythrocytes
Torres bodies -Amorphous eosinophilic nuclear inclusions associated with yellow fever, a disease caused by the arbovirus. The disease is spread by mosquitos or infected monkeys from where the infection may be epidemic. Torres bodies may be seen in the liver with Councilman and Villela bodies

Tygeson bodies - Irregular bodies (elementary and reticulate) of infected reticuloendothelial cells associated with Chlamydia pneumonia infection. They may be seen in the presence of Halberstäedter-von Prowazek bodies
Tympanic bodies - Ovoid bodies found in the upper part of the superior bulb of the internal jugular vein in the inner ear (see image). They are believed to be similar to the carotid bodies in structure and function
U bodies - These are cytoplasmic structures that are the site for assembly and storage of small nuclear ribonucleoproteins (snRNPs) before their import into the nucleus. U bodies are uridine-rich and are associated with P bodies (see P bodies) 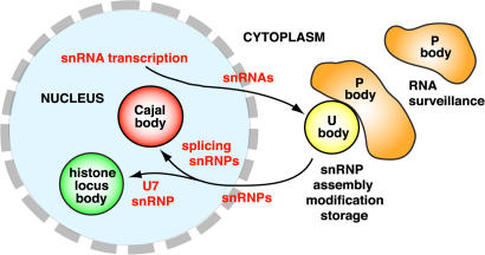 Location of the cytoplasmic U body
​Ultimobranchial bodies - These small organs are found in the neck region of many animals and are a derivate of the pharyngeal cavity. In humans, the bodies are embryological structures that give rise to the calcitonin-producing cells (the ‘C’ cells or parafollicular cells) of the thyroid gland. There are several other names for these bodies which include the postbranchial and telobranchial bodies as well as accessory thyroid glands
Uterine bodies - Often known as the corpus uteri or body of uterus, it is descriptive of the upper, wider part of the uterus which contains the uterine cavity. The uterine body is mainly composed of a thick muscle layer (the myometrium) externally surrounded by a connective tissue sheath (the perimetrium). Inside the uterine cavity is the endometrium, the glandular mucosa
​Uncle bodies - These are antibodies to human antibodies; in other words, an uncle body is an antibody to an antibody

Vater-Pacini bodies - Small lamellated, oval bodies that are found in tissues such as the skin of the fingers. They are formed of concentric layers of connective tissue with a central soft core in which the nerves are located. They are sensitive to vibration and pressure and are one of the major types of mechanoreceptor. They are often known as lamellar or pacinian corpuscles, Pacini bodies or Vater bodies. Also see Golgi-Mazzoni bodies
​
Vermiform bodies - Peculiar sinuous invaginations of the plasma membrane seen in the Kupffer cells of the liver
Verocay bodies - These are pallisading nuclei of the highly cellular (Antoni A) areas of a schwannoma. This neoplasma is generally benign but may exhibit lining up of the nuclei into bands termed Verocay bodies. The less cellular Antoni B regions lack definite arrangement

Vertebral bodies - These are the main part of the vertebra that protect the spinal cord and nerve roots and provides an attachment for the discs situated between them. The vertebral body and the discs increase in size from the head to the sacrum
Vesicle-like bodies – This is a broad term that describes vesicular structures such as microsomes. These are small vesicle-containing fragments of ribosomes and other organelles that are formed in the laboratory by the breakage of cells during centrifugation. The image shows an electron micrograph of the vesicular, microsomal fraction following density gradient centrifugation of cells. Vesicle-like bodies may also be seen in living cells such as those found in the inner ear during the development of certain fish. Also see paramural and multivesicular bodies
Villela bodies - Granular brown and yellow structures found in macrophages of the liver in patients with yellow fever. They are considered to be degenerate Councilman bodies or necrotic Kupffer cells and appear late in the course of the disease
Virchow-Hassall bodies – see Hassall bodies

Vitreous bodies - Round or discoid clouds of solid particles found in the eye. They are found in Benson’s disease (asteroid hyalitis) which occurs unilaterally in patients over the age of sixty years. Also termed Hyaloid bodies

Wagner-Meissner bodies - Also known as Wagner-Meissner corpuscles, these are oval, eosinophilic aggregates found in the cellular sheets of neurofibromas and schwannomas. They are superficial mechanoreceptors of the peripheral nervous system and are stimulated by microscopic Schwannian structures called tactoid or tactile corpuscle-like bodies (see Tactoid bodies)
Warthin-Finkeldey bodies - Multinucleated cells with eosinophilic nuclear and cytoplasmic inclusions in patients with measles. The bodies consist of fused lymphocytes and can be seen following vaccination for measles

Weibel-Palade bodies - Rod-shaped bundles of microtubules found in the cytoplasm of vascular endothelium. They are associated with von Willebrand’s disease, the most common hereditary bleeding disorder. Symptoms include abnormal menstrual bleeding, bleeding of the gums, bruising, nose bleeds and skin rash. The disease is caused by a defect or deficiency in the von Willebrand factor, a protein that is required for platelet adhesion
Winkler bodies - Spherical structures found in lesions in patients with syphilis, a disease caused by the spirochaete Treponema pallidum (see image)

​Yellow bodies - These are round, pale yellow, cytoplasmic inclusions found in adenomas of the thyroid.  They are a useful cytomorphologic indicator of hyalinizing trabecular adenomas of the thyroid but are less commonly seen in Hürthle cell adenomas and papillary carcinomas. The image of a thyroid adenoma shows a cytoplasmic yellow body just to the left of centre with a halo of retracted cytoplasm visible around the body

​​Yellow-Brown bodies - see Hamazaki-Wesenberg bodies
Zebra bodies - Membrane-bound granules containing lamellae found in Schwann cells and macrophages. They are associated with metachromatic leucodystrophy and storage diseases such as Niemann-Pick and mucopolysaccharidoses. The storage diseases result in an accumulation of sphingomyelin and other phospholipids in the reticuloendothelial system

Zellballen bodies - Clusters of tumour cells arranged in distinctive cell balls found in pheochromocytoma (a neuroendocrine tumour of the adrenal) and closely related extra-adrenal paragangliomas. These rare tumours secrete high amounts of catecholamines and although generally benign, can cause life-threatening hypertension
Zuckerkandl bodies - Small masses of chromaffin cells found near the sympathetic ganglia along the abdominal aorta (ao). Also known as para-aortic bodies (pab), they help to control respiration. They serve as receptors that are responsive to concentrations in oxygen and carbon dioxide