Affibodies - These are molecules of small proteins that have been engineered to bind to a large number of target proteins or peptides, imitating monoclonal antibodies. They are used in biochemical research in areas such as diagnostic imaging, purification of proteins and in the development of biopharmaceutical drugs
​Aggresome bodies - Accumulations of misfolded proteins that are common to age-related neurodegenerative disorders such as Parkinson's disease, Alzheimer's disease and amyotrophic lateral sclerosis. These proteinaceous inclusion bodies form on exposure to cellular stress

Alder-Reilly bodies - Granular inclusions found in white blood cells in the Alder-Reilly anomaly. This disease is associated with the mucopolysaccharidoses, a group of metabolic disorders. These granular bodies are also found in other diseases such as Hunter’s and Hurler’s syndromes They stain a dark colour with Giemsa and react metachromatically with toluidine blue.
Alkapton bodies - These are dark accumulations that form in the urine in patients with alkaptonuria, a rare inherited genetic disorder. Also known as ochronosis, the disease is caused by the inability of the body to process the amino acids tyrosine and phenylalanine. As a result, the body amasses homogentisic acid, an intermediate substance which oxidises to form the dark alkapton bodies in the urine. The accumulations of homogentisic acid can also cause blue-black discolouration in other tissues such as bone and cartilage
Alpha 1 antitrypsin bodies - Circular, sharply defined, solid bodies found in the cytoplasmic of hepatocytes in patients with chronic liver diseases such as cirrhosis, liver fibrosis and hepatocellular carcinoma. They are not usually seen in sections stained with haematoxylin and eosin but are strongly PAS positive after digestion with diastase. The bodies indicate a deficiency in alpha 1 antitrypsin which is often associated with diseases of the liver. The deficiency has also been linked with certain diseases of the lung, particularly emphysema
Amygdaloid bodies - Large subcortical structures (labelled amygdala in the image) located in the temporal lobe of the brain in front of the hippocampus. They are involved in a range of functions such as motor activities, behaviour and memory. Some of the most prominent pathways to the amygdaloid bodies come from cortical areas in the temporal and frontal lobes. These pathways transmit highly processed sensory information to the amygdaloid bodies where it is evaluated in terms of its biological significance
Amyloid bodies - Basophilic, hyaline masses derived from degenerate cells or inspissated secretions and consist of concentric lamellae. They are found in the prostate, brain and lung. Sometimes termed corpora amylacea or polyglucosan bodies, they become more numerous with advancing age – especially over 50 years and may undergo calcification
Anococcygeal bodies - Layered musculotendinous structures found between the anterior aspect of the coccyx and the posterior wall of the anorectal boundary. Also called Symington bodies

​Antibodies - These are small proteins produced by plasma cells that circulate in the bloodstream. Also known as immunoglobulins, antibodies are large, Y-shaped proteins that are part of the immune system. They are able to neutralize pathogens such as bacteria and viruses by recognizing an antigen, a unique molecule on the harmful agent

Antibodies attacking a virus
Aortic bodies - Aortic bodies are small pieces of tissue in the aorta containing chemoreceptors. They respond to changes in the concentration of oxygen and carbon dioxide in arterial blood. These bodies are associated with groups of neurones in the medulla oblongata of the brain and help to control the process of ventilation. Also called cardioaortic, epithelioid and supracardial bodies
Apoptotic bodies - Small fragments of cells as a consequence of apoptosis (programmed cell death). The process may be physiological or pathological
Arantius bodies - Small nodules located at the cusps of the aortic and pulmonary valves 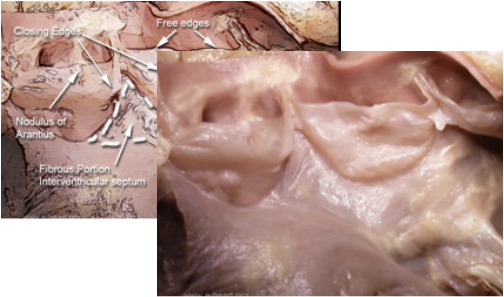 Arantius bodies (nodules)
Arao-Perkins bodies - Small fibrous bodies found in the dermal papilla on which the entire structure of the hair follicle sits. They stain with elastic dyes and their structure and distribution may alter in conditions of the hair such as alopecia
Armanni-Ebstein bodies - These lesions are found in the kidney and consist of cytoplasmic vacuolation in cells of the proximal tubules. The vacuoles are characterized by accumulations of glycogen, are PAS positive and are chiefly associated with diabetic ketoacidosis. These bodies may also be seen in patients with Fanconi syndrome, a renal disorder resulting in excess amounts of glucose, salts and amino acids being excreted in the urine
Aschoff bodies - Areas of granulomatous inflammation with central necrosis surrounded by histiocytes, lymphocytes and giant cells. Aschoff bodies are synonymous with the rheumatic fever (or Aschoff) nodule. These bodies are painless pea sized nodules found throughout the body but are most typically found in the heart. They are eventually replaced by a fibrous scar
Asteroid bodies - These intensely eosinophilic bodies are found around certain microorganisms and may resemble star-like, asteroid, club or cigar-shaped configurations.  Sometimes referred to as cigar bodies, they are found in the disease sporotrichosis, a chronic infection caused by the microscopic fungus Sporothrix schenckii. The disease causes painless skin ulcers and nodules in the lymph vessels near the skin surfaces, but can also affect the lungs, joints, and central nervous system. The in vivo formation of this asteroid-like material around microbes or biologically inert substances is known as the Splendore-Hoeppli phenomenon (see image above). Several other mucocutaneous bacterial and fungal infections such as actinomycosis and aspergillosis can also generate this reaction. Asteroid bodies are generally nonspecific but may be equivalent to the Asteroid-Schaumann bodies of sarcoidosis and other granulomatous diseases such as berylliosis
Asteroid-Schaumann bodies - Star-like, spider or umbrella shaped cytoplasmic inclusions found in giant cells. They occur in granulomatous diseases such as sarcoidosis, tuberculosis, leprosy, fungal infections and foreign body reactions. Also known as Schaumann or Conchoid bodies, they are thought to be composed of cytoplasmic filaments or microtubular components
Auer bodies - Cytoplasmic rod-shaped structures found in immature myeloid cells (known as faggot cells). The bodies occur in acute myeloid leukaemia and are thought to be abnormal lysosomes. They contain the enzymes peroxidase and acid phosphatase and stain red with azure eosin
Babes-Ernst bodies - Cytoplasmic granules possessing a strong affinity for nuclear stains. They are often rich in phosphorus and are present in some species of bacteria and fungi. Also termed Babes-Ernst granules, they can be found in Corynebacterium diphtheriae
​
Babes-Negri bodies - see Negri bodies
Balbiani bodies - Membrane-less structures in the cytoplasm of oocytes that consist of cell organelles and macromolecules. They are found in a wide variety of vertebrate and invertebrate species. Sometimes termed Balbiani vitelline bodies, they originate near the nucleus and differentiate into well-defined masses often surrounded by mitochondria before breaking down to release their constituents

Bamboo bodies - Cylindrical, high density foreign bodies found in the lung.  Post traumatic bamboo bodies have been found embedded in lung parenchyma. Although they produce a similar appearance to asbestosis, their pathological significance is unknown
Banana bodies - These are yellow-brown, banana-shaped fibres that can be found in the dermis of the skin in ochronosis, a syndrome caused by the accumulation of homogentisic acid. The condition was named after the microscopic, yellowish discolouration of the tissue often associated with alkaptonuria although they may occur following topical administration of phenol-type complexes such as hydroquinone

Barr bodies - A small structure of sex chromatin found on the edge of the nucleus just inside the nuclear membrane of female cells (compare with Davidson bodies). They may be used to discover the sex of a baby before birth by examining cells from amniotic fluid. One Barr body = chromatin positive = female XX; No Barr bodies = chromatin negative = male XY
Basal bodies - Modified centrioles occuring at the base of flagella in motile cells. Basal bodies control the direction of movement of the cilia and are composed of microtubules (also see Parabasal bodies)

Bielschowsky bodies - These are intraneuronal, filamentous inclusions comprising polyglucosan and having features identical to Lafora bodies. They are seen in status marmoratus (a form of cerebral palsy), the presence in full-term infants of basal nucleus lesions resulting from acute total asphyxia. The lesions have a marbled appearance caused by neuronal loss and an overgrowth of myelin
Biondi bodies - Filamentous, ring or arc-like structures found in the epithelium of the choroid plexus, the area where CSF is produced. These bodies are also termed Biondi filaments or silver rings of Biondi. They are characteristic of aging and are composed of intracellular aggregates of amyloid fibrils that fluoresce with Thioflavin S. These bodies also contain pigment and lipid with increasing frequency from the fourth decade of life
Birbeck bodies - These granules are shaped like rods or tennis rackets with a central linear density and a striated appearance. They are characteristic of Langerhans cell histiocytosis (Histiocytosis X), one of a group of rare conditions collectively known as histiocytosis
Blue bodies - These are laminated PAS+ iron-containing bodies found in alveolar macrophages in interstitial pneumonia and other lung conditions such as asbestosis. Calcium carbonate is a major component of them and is responsible for their birefringence in unstained sections and solubility in acid solutions. Blue bodies (often termed pulmonary blue bodies) also contain a matrix of iron and mucopolysacharride and are thought to be a product of histiocytic catabolism. Also see Koch's blue bodies and paranuclear blue bodies
Bollinger bodies - Intracytoplasmic, eosinophilic inclusions in the epithelial cells of birds. These bodies are an aggregate of Borrell bodies (see below) and are pathognomic for fowlpox, a disease that affects chickens, turkeys and other birds. The disease is not transmissible to humans
Borrell bodies - These are particles of the fowlpox virus, aggregates of which form Bollinger bodies. When Borrell bodies are ruptured, large numbers of fowlpox virus particles are released

Bracht-Wachter bodies  - These are yellow-white spots found in the myocardium in patients with infective endocarditis (see image). Histologically, they are collections of chronic inflammatory cells, mainly lymphocytes and histiocytes
Brassy bodies - These are dark and shrunken red blood cells found in malarial disease

Bull’s eye bodies - These are target red blood cells with a bull's eye appearance that result from excess membrane that bulges in the centre of the cell. Also known as codocytes or Mexican hat cells, they are the result of defective globin synthesis and are seen in a variety of blood disorders as well as in obstructive liver disease. Bull’s eye bodies have also been described as an uncommon finding in adenocarcinoma cells in malignant serous effusions
Bunina bodies - Eosinophilic inclusions located in the cytoplasm of nerve cells. They are the hallmark of neuronal degenerative diseases such as motor neurone disease and amyotrophic lateral sclerosis (also known as Lou Gehrig disease after the New York Yankees baseball player from the 1930's who was afflicted with the condition). Motor neurone disease however is also associated with a number of other intracellular inclusion bodies 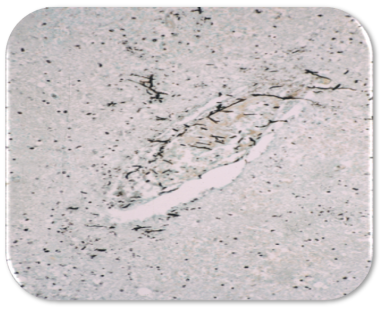